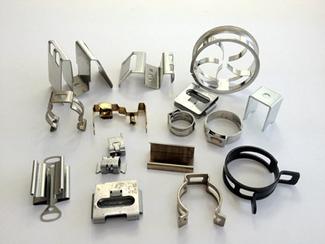 ​Fourslide metal stamping, a process that integrates stamping and forming operations, creates stamped metal parts and wire forms from strips and wire consisting of steel, copper, aluminum, bronze and many other metals. From these stock metal strips, manufacturers create small, intricate parts, which may require bends greater than 90°. During slide forming, sliding tools glide into the metal blank from four directions at right angles to one another, bending the metal around a vertical mandrel. The slide forming area is equipped with timed mechanisms called cams, which regulate slide movement. These additional movements allow fourslides to produce complex parts with multiple bends and twists. Highly versatile and precise fourslide metal stamping machines can perform a number of operations before ejecting the part, sometimes completely producing a part in one four-slide operation.

Fourslide tools can cost substantially less than power press tools and produces accurate repeatable parts. Complex forming operations that add cost to the progressive tooling can be formed easily on a Fourslide.

Multislide is basically the same as the Fourslide, but with up to 8 slides for extra forming motions. A Multislide is also a bit stronger than a Fourslide to accommodate thicker parts.

Equipment of Four Slide Multi Slides Verti Slides:
Fourslides in a wide variety of sizes from 0 up to 38 tons